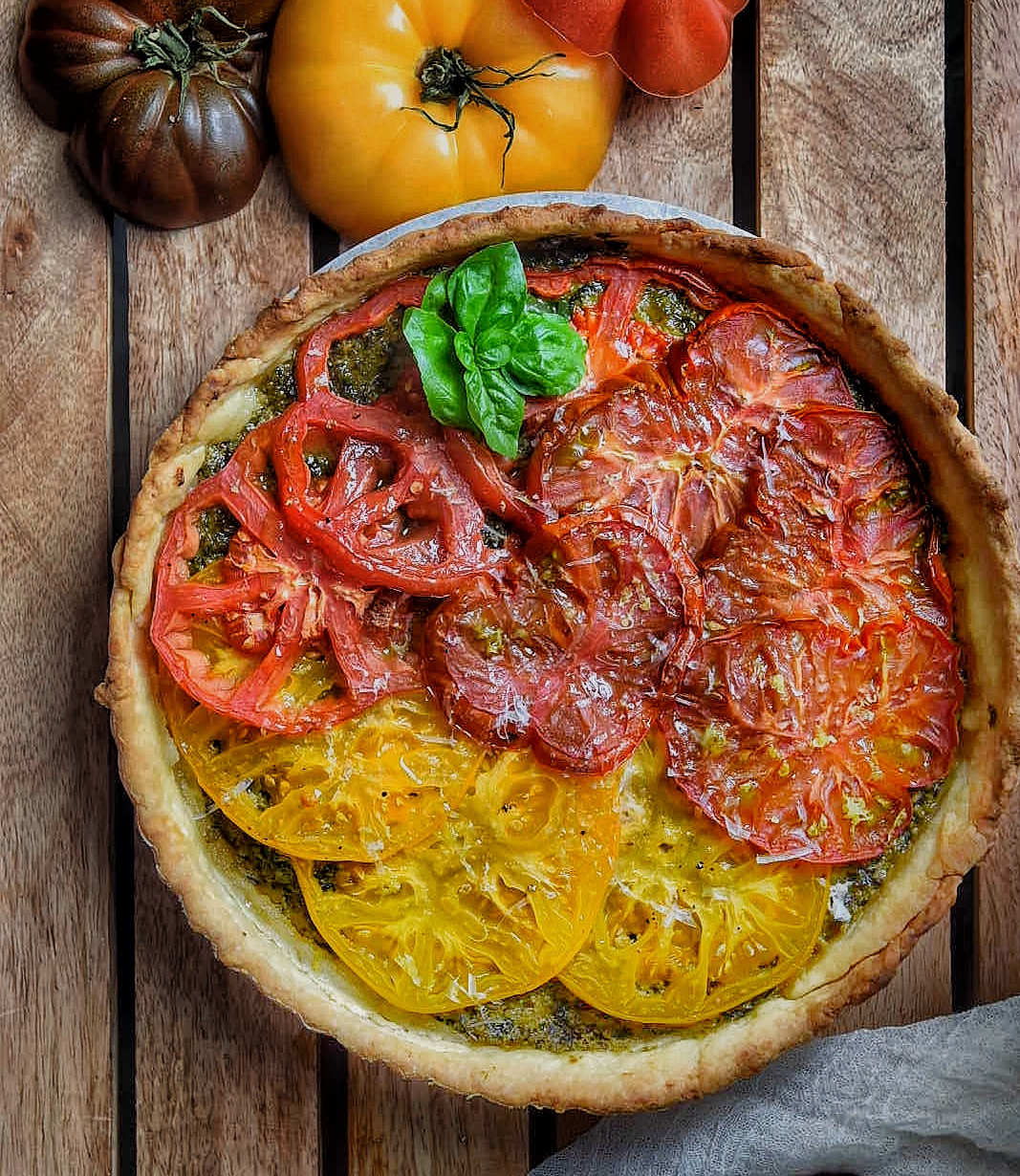 Tart has fancy ring to its name, but simply put, it’s just a pie without the top! Since it doesn’t have a top to cover everything, it usually leads to prettier/fancier presentations so it just looks a lot more delicate. With that, I have to say I tend make WAAYYYY more tarts than pies.

I make a lot of dessert tarts, but I absolutely love savory tarts. Pretty much anytime I find a rare, fresh ingredient that’s special, and tastes amazing on it’s own, I tend to put it in a tart to make that ingredient the star.

So when I saw these gorgeous heirloom tomatoes, I had to make a tomato tart!

As I mentioned, a tart is a very close relative to a pie, but tarts actually came YEARS after pies… about 200 years after! In the beginning, pies were considered poor man’s dish, while tarts were served to high class crowds. What’s more interesting (to me) is that in the beginning, tarts were actually considered a savory dish, and usually had a meat or fish filling! Interesting, because nowadays there are way more dessert tarts than savory!

Just like google says “an open pastry case containing a filling.” The base is a shortcrust pastry and you can layer it with whatever you wish.

I used a homemade dough here, but if you can get your hands on some store bought dough… by all means use it, I do it all the time. I also like using frozen puff pastry dough sometimes, works beautifully! But, if you do make the dough, I definitely recommend making a big batch. This dough is very freezer friendly just take it out a couple hours before using and you got fresh homemade dough every time!

Key to a great dough: use frozen butter and do not knead the dough! Right before you’re about to make the dough, put the stick of butter in the freezer for 15-20 minutes. You can cut the butter into small cubes or I like to use a large grater to grate my butter into the flour. Also, you shouldn’t have to knead the dough at all. Just add cold water, a few tablespoons at a time, until it just comes together into a crumbly ball. Which is a great thing because it requires less work 🙂

I made my own basil pesto here but you can definitely use store bought pesto, they have some great ones at the supermarkets nowadays.
Last thing, if you can’t get your hands on heirloom tomatoes, just use regular tomatoes. You’ll wow yourself and your guests just as much!

I know it looks like a lot of steps, but it really is fairly simple and is just SOOOOOO WORTH IT! And if you’re using store bought dough and pesto, just skip to step 5!

Important for a great tart: